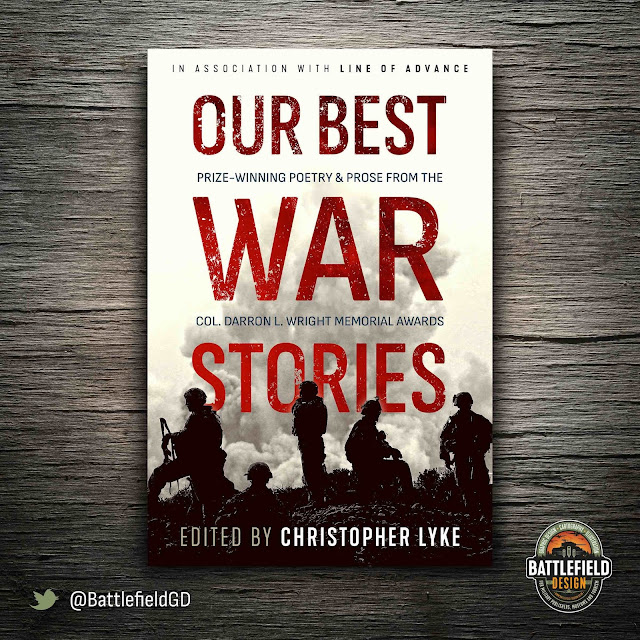 An independent micro-publisher of histories and poetry, often centered on the voices and military experiences of the American Midwest, has revealed the cover of a forthcoming anthology of prose and poetry collecting five years’ of winners and finalists curated by editors of the Chicago-based non-profit literary journal Line of Advance.

“We’re very pleased to again work with Battlefield Designs for the cover of an anthology we're calling Our Best War Stories,” says Randy Brown, editor-publisher of the Iowa-based Middle West Press LLC. “Designer Paul Hewitt artfully delivered a compelling visual concept, one that gives tribute to the experiences of service members, veterans, and families—from all eras, branches, and theaters. This book will be a significant benchmark of creative story-telling around the contemporary military experience.”

Winners will be notified not later than Aug. 31, 2020. For more information visit: www.lineofadvance.org/colonel-darren-l-wright-contest

To enter the contest via Submittable, visit: lineofadvance.submittable.com/submit

The print and e-book anthology forthcoming in October 2020 will collect the winning entries from the first five years (2016-2020) of the competition, including this year’s finalists.

Administered by the Line of Advance since 2016, and underwritten by the Blake and Bailey Foundation, the Darron L. Wright Awards commemorate a U.S. Army leader and author who was killed in a September 2013 parachute training accident. Darron L. Wright, 45, had deployed three times to Iraq, and was author of a 2012 memoir Iraq Full Circle: From Shock and Awe to the Last Combat Patrol in Baghdad and Beyond.

Middle West Press LLC is a Johnston, Iowa-based editor and publisher of non-fiction, fiction, journalism, and poetry, with projects that feature the unique voices of the American Midwest. As an independent micro-press, it publishes one to four titles annually. Titled Our Best War Stories, the Line of Advance Darron L. Wright Awards anthology will be the sixth of its titles involving war and military themes.